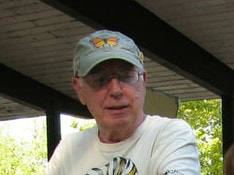 Frank Apsey, an avid bird watcher for over 40 years, currently resides in Harrisville, MI and is a member of the AuSable Valley Audubon. He has participated in Cornell’s University’s Project Tanager and Birds in Forested Landscapes (BFL). In addition to his many bird articles in local periodicals, Frank published a booklet, The Birds of S.W. Kentwood and wrote and produced a monthly newsletter, The Wood Warbler, while residing in Kentwood, MI. He recently surveyed nesting sites of birds in AuSable Township in Iosco County for the Michigan Bird Breeding Atlas II.

HARRISVILLE When Frank Apsey saw an unusual butterfly dip and bob across his yard one day, he got curious.

"I went online to surf the Internet and found out it was a Buckeye Butterfly," he said as he sat with his wife, Marilyn, in a conference room at the Alcona County Public Library in Harrisville.

On the folding table in front of him was a pile of notebooks, photographs, logs, tags, boxes and envelopes, which he brought along with him. He even had a butterfly embroidered onto his hat and was wearing a colorful T-shirt printed with an image of a caterpillar on the front.

As his online search continued that day, Apsey stumbled across a site called monarchwatch.org, and in a few key strokes changed his life forever.

Apsey is one of dozens of Northeast Michigan residents, who volunteer to tag butterflies, count frogs in the spring, comb wetlands for endangered species, participate in bird counts, even measure rain and snow in their backyards, generating data used by scientists worldwide.

The popular monarch organization was one of the first to utilize backyard citizen scientists, who began tagging the black and orange butterflies in the early 1990s. The papery creatures migrate from El Rosario, Mexico, to parts of the United States and Canada and back every year - a 4,700-mile round trip journey.


"But the butterfly that leaves Mexico isn't the same one that comes back," Apsey said.

One generation travels a substantial distance, lays eggs and dies. Then those eggs hatch and morph into butterflies, which continue to fly and hatch three more generations of single-minded fliers.

Inspired by what he read on the site, Apsey quickly ordered 25 tiny tags for $15, and learned how to apply them by studying enclosed reading material.

From there, Apsey's passion snowballed, and he maintained carefully detailed logs of his observations, and input his data online, joining more than 4,000 other observers.

Although he had studied life sciences in college during his two years as a student, Apsey was detoured from the field by life. He served in the military, worked other jobs, and was toy salesman at Meijer for six years.

But once he and his wife, Marilyn, moved to Harrisville, he got his chance to experiment with nature in his backyard. He also lives across the street from Harrisville State Park and gives tagging demonstrations in August.

"The first time he got those tags he went down to the park and organized a presentation to tell other people, especially children, about the monarchs," Marilyn said. "His first presentation was a hit and people were asking him when his next one would be."

"It's a big thing over there now," Frank said. "I love getting those children involved so they can feel the power of the feet and legs of the monarch on their fingers. I love watching the joy and love in those kids, especially when they're really young."

He grins from ear to ear.

But the entertainment doesn't stop there.

Frank brought caterpillars home and through observation figured out when they would transform themselves into the gold flecked chrysalises, and later break out into butterflies.

"Just doing this in the house I can predict when they're going to come out. Usually it's 11 days," he said.

He also bought a butterfly condo for $45 to safely house the emerging insects.

"I truly became addicted when Frank brought caterpillars into the house and put them onto branches and I had these living things all over my house," Marilyn said. She also used what she learned in her classroom, where she works with special needs children.

"My son said if this doesn't cause someone to believe in God, what will?" she said.